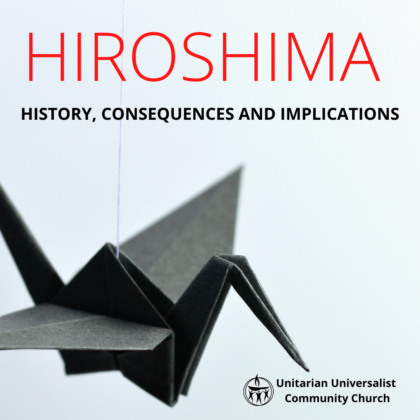 6 August 1945 is one of the most important dates not only in our own history, but of the history of the world.  It was the day that the U.S. government dropped an atomic bomb on Hiroshima, Japan and three days later, dropped a similar bomb on Nagasaki, thus ushering in the nuclear age.  Since that time, nuclear bombs have been created that are thousands of times more powerful than the one dropped on Hiroshima.  Also, there are some 15,000 of those weapons distributed among 8 nations, and other nations are tempted to create more.  The enormity of the power of these weapons plus their ubiquity makes it not a possibility, but a probability that those weapons will be used either deliberately or accidentally. Therefore, it behooves us to remember Hiroshima so as to make a commitment to never again use these terrible weapons, and more importantly to rid ourselves of them and never again build another one of these immoral weapons.

Join Rev. Harold Beu to explore the history of the creation and implementation of that terrible weapon and the ways we can solve our disputes not with the war option but with negotiation, diplomacy, and compromise.  This class will meet for one day only on December 4 at 4:00 PM.  Please contact the office (uucommunity@gmail.com) to reserve your spot.