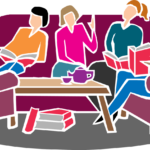 The Women’s Book Group is open to all UUCC women. At the beginning of each church year, participants offer up their favorite reads, and books are chosen for the coming year along with the schedule, discussion leaders, and hostesses.  *Meetings are usually held at the church on the second Friday of the month September through May, preceded by lunch together at a nearby restaurant.

While the Women’s Book Group is on hiatus, consider picking up one of the titles on this Climate Change Reading List compiled by the Kalamazoo Climate Crisis Coalition for your summer reading.

• Climate Change from the Streets

• The New Climate War: The Fight to Take Back Our Planet

• This Is an Uprising

• A Climate Carol: And Other Cli-Fi Short Stories

• The Right to Be Cold

• Winning the Green New Deal: How We Must, How We Can

• The Story of More

• Parable of the Sower

• We Are the Weather: Saving the Planet Begins at Breakfast

• The Uninhabitable Earth: Life After Warming

• Learning to Die in the Anthropocene: Reflections on the End of a Civilization

• Can We Price Carbon?

• Cool Cities: Urban Sovereignty and the Fix for Global Warming

• The Climate Swerve: Reflections on Mind, Hope, and Survival

• Don’t Even Think About It

• This Changes Everything: Capitalism vs. The Climate

*While the building is closed due to Covid-19, the Book Group will meet via Zoom. Please contact the office for more information.